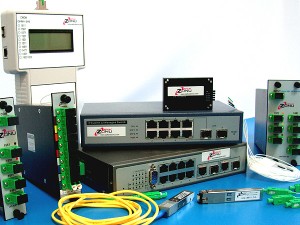 SFC is the Edge Access Network Solution for delivery of Fiber Optic Commercial Data (FE/GbE/SONET/SDH) Services in “Fiber-Starved” HFC and other Telecommunications Networks. OZC provides SFC Technology with a complete line of products for Business Class Commercial Services. The OZC Value Proposition is that our SFC Technology DOUBLES Optical Fiber Capacity (compared to legacy CWDM implementations) and delivers Operational Benefits to improve the Service Provider’s ROI, over both the short and long term.

SFC is the acronym used to describe Single Fiber, Full Duplex, CWDM, SFP Transceivers over Single Wavelength, the associated Passive Optical Components (e.g. 8 Channel Mux/Dmux, 4+6 Channel “Adder” Mux/Dmux or Single Channel Add/Drop) and Layer 2 Gigabit Ethernet Switch CPE, used primarily by MSOs to offer Commercial Services over their installed Hybrid Fiber-Coax (HFC) Cable Plant of Single Mode Fiber. A link consisting of a Single Fiber connected from one SFC Transceiver to the other, both transmitting over the same ITU channel, generate a Point-to-Point (P2P) link. Multiple SFC Transceivers, operating at different ITU CWDM wavelengths, are multiplexed together by our passive Mux/Dmux components, transmitted over a Single Fiber, and de-multiplexed to an identical set of SFC Transceivers at the other end, create multiple autonomous P2P independent links over Single Fiber.

There are many benefits to using optical links, in place of waveguide and coaxial cable, for the transport of RF signals. In situations where equipment (antennas, satcom modems, etc.) are…

GPS is not only used for global positioning; many modern electronic communications systems rely on GPS distribution for timing and synchronization.  GPS distribution provides a global and universal time code…